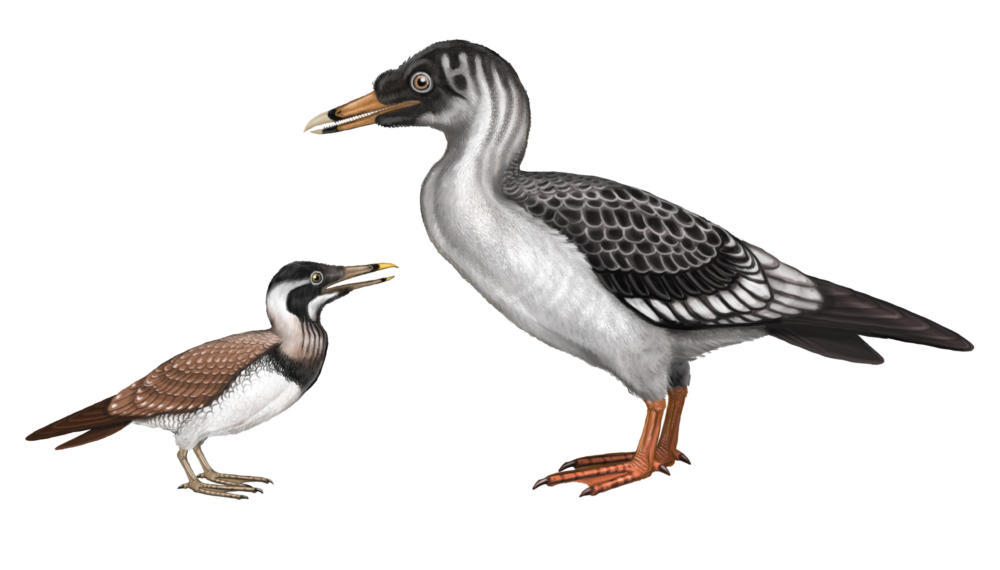 A new fossil gem from the Sint-Pietersberg – the youngest known toothed bird in the world!

It is widely known that the limestones at the Sint-Pietersberg and its environs are replete with fossils – silent witnesses of the rich life in a shallow and warm sea, between 68 and 66 million years ago. However, the find of bird remains from these deposits came as a big surprise. That surprise became even bigger when it turned out that the new taxa were involved – in one word: spectacular!

More than two decades ago, shortly after one another, remains of two birds were uncovered by amateur palaeontologists along the southern margin of the Sint-Pietersberg, or Montagne Saint-Pierre, near Eben Emael (province of Liège).

The first specimen, collected by Rudi Dortangs, was briefly described in 2002. This comprises a few isolated vertebrae and bones, as well as a single tooth. Some pieces had been picked up from scree by the collector, while others still sit encapsulated in a limestone block. At the time, this fossil, around 66.9 million years old, was considered to be closely related to the North American genus Ichthyornis, or ‘fish bird’.

Recently, high-resolution CT scans have been made of this block by the research team of Dr Daniel Field (University of Cambridge, England). These clearly showed how special this particular bird really was. Although the skull is not preserved, a single bone of the palate, the pterygoid, is present. This has proved instrumental in describing and naming a new genus and species of bird, Janavis finalidens. It is indeed closely related to Ichthyornis. Janavis literally means Janus bird. The Roman deity Janus, with two faces, signified transitions of all kinds, with eyes fixed on the past as well as the future.

‘Beautiful name, says John Jagt, curator of palaeontology at the Natural History Museum of Maastricht, and co-author of the paper. The Cambridge team proposed this generic name; they got me ‘hook, line and sinker’.

Janavis finalidens is of great importance in being the youngest known representantive of toothed birds globally. The species name finalidens (‘last tooth’) sums it up nicely. It documents that, during the late Maastrichtian around 67 million years ago, toothed birds co-occurred with very early ‘modern’ birds such as Asteriornis maastrichtenis, which was described over two years ago.

Asteriornis originates from the same limestone levels; it was collected by Maarten van Dinther. It is interpreted as close to the most recent common ancestor of present-day land and water fowl (chicken- and duck-like birds). The name may be translated as Asteria’s bird. In Greek mythology, Asteria was a goddess – Zeus was interested in her, but to escape from him, she threw herself onto the earth, in meteor-like fashion, and transformed into a quail in the process.

Jagt remarks, ‘I still can’t my head around it – how lucky are we in having these two finds at our disposal? A toothed bird in association with one that is close to the ancestor of our land and water fowl, from the same level and the same quarry. By accident? No, not at all – two pairs of well-trained eyes (of collectors Maarten and Rudi) made certain to salvage these finds. A large portion of our picture of bird evolution can now be filled in. Asteriornis and Janavis have put the type Maastrichtian ever firmer on the map.’

The paper in which Rudi’s bird is named Janavis finalidens has now been published in the prestigious scientific journal Nature. The type specimen, with registration number NHMM RD 271, will not be freed further from the matrix block in which it sits.

Now that research into both Asteriornis maastrichtensis and Janavis finalidens at the University of Cambridge has been completed, both birds will be returning home to the Natuurhistorisch Museum Maastricht. To celebrate this fact a special exhibition has been prepared, entitled ‘Wonderchicken & Co. – Hidden gems’; this may be visited from December 11, 2022 onwards. 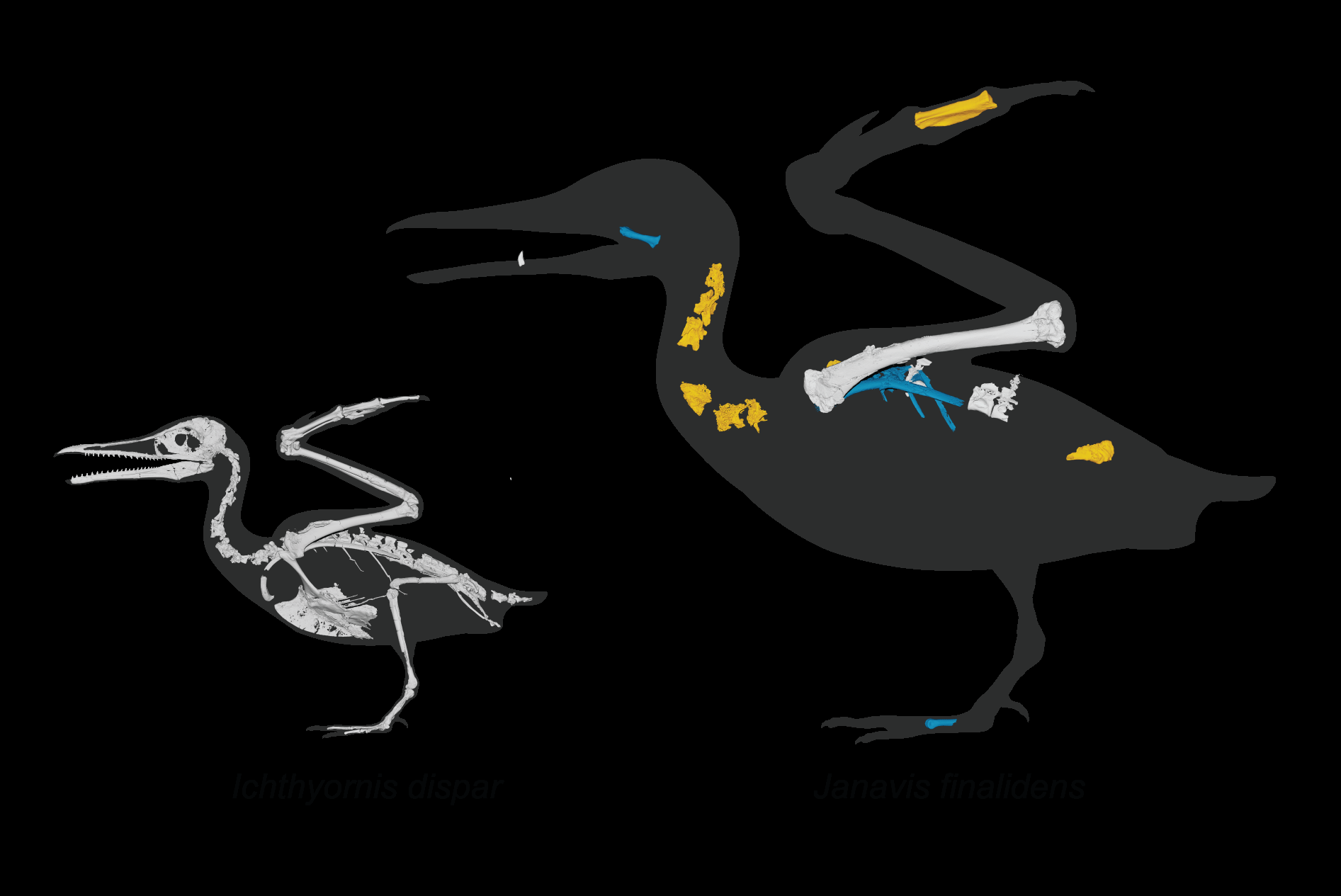 Skeletal reconstruction of the last known toothed bird, Janavis finalidens, in comparison with its close relative, Ichthyornis dispar. The fossil of Janavis finalidens is 66.7 million years old; the much smaller, yet more complete, Ichthyornis dispar originates from North America, and is between 90 and 83 million years old (credit: Dr Juan Benito Moreno, University of Cambridge). 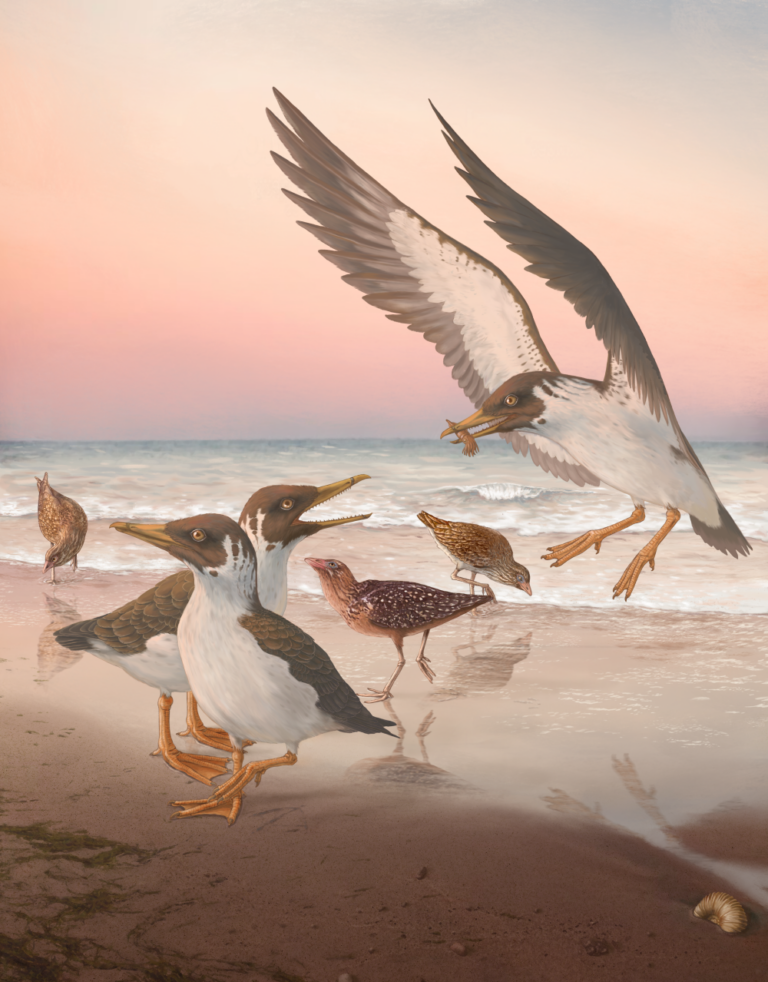 Artist’s reconstruction of the last known toothed bird, Janavis finalidens, in its original environment surrounded by the contemporaneous Asteriornis maastrichtensis. 66.7 million years ago parts of north-west Belgium and the southern Netherlands were covered by a shallow sea, and conditions were similar to modern tropical beaches such as those in the Bahamas. Janavis was a large-bodied marine bird, had long wings and teeth in its jaws, and it may have fished in the tropical sea (credit: Phillip Krzeminski). 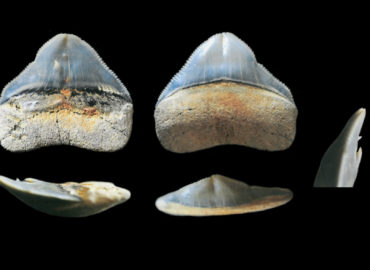 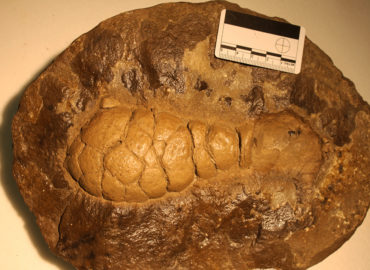 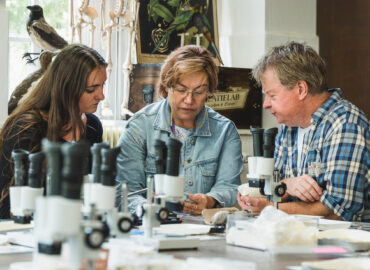